Terroir (French pronunciation:  [tair-wha]; Spanish: terruño, pago) was originally a French term in wine,coffee and tea used to denote the special characteristics that geography bestowed upon them. It is a group of agricultural sites in same region which share the same soil, weather conditions and farming techniques, which each contribute to the unique qualities of the crop. It can be very loosely translated as "a sense of place" which is embodied in certain qualities, and the sum of the effects that the local environment has had on the manufacture of the product.
*from wikipedia
Just like wine and whiskies there is indeed a terroir for tequila.
-About an hour to the of there is the town of .  This is known as La Valle de Tequila, or the Valley.  This area also includes the towns of El Arenal and Amatitan.  In the the elevation is around 4,000 feet, the soil is volcanic, and the average temperature is 75 degrees.


-2 hours east and just north of is known as , or the .  The main towns in this area are Arandas, Jesus Maria, Atotonilco, and Tepetitlan.  Here the elevation is around 6,750 feet, the soil is red clay, and the agave mature at a slower rate than in La Valley.  The average temperature is 64 degrees, with much cooler nights, and typically has more rainfall than the .
So with all that being said, these are the elements of terroir you may find when tasting tequila….
Common dominant traits of tequilas from La Valle de Tequila (the Valley) are;
-Herbal
-Floral
-Vegetal
Dominant traits of tequilas from Los Altos (the  are;
-Fruit
-Earth
-typically sweeter than those of the Lowlands 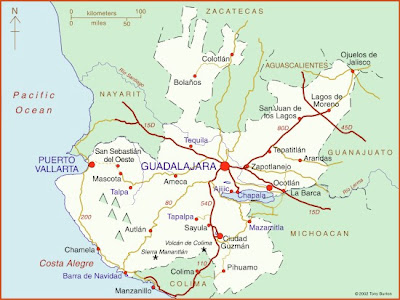